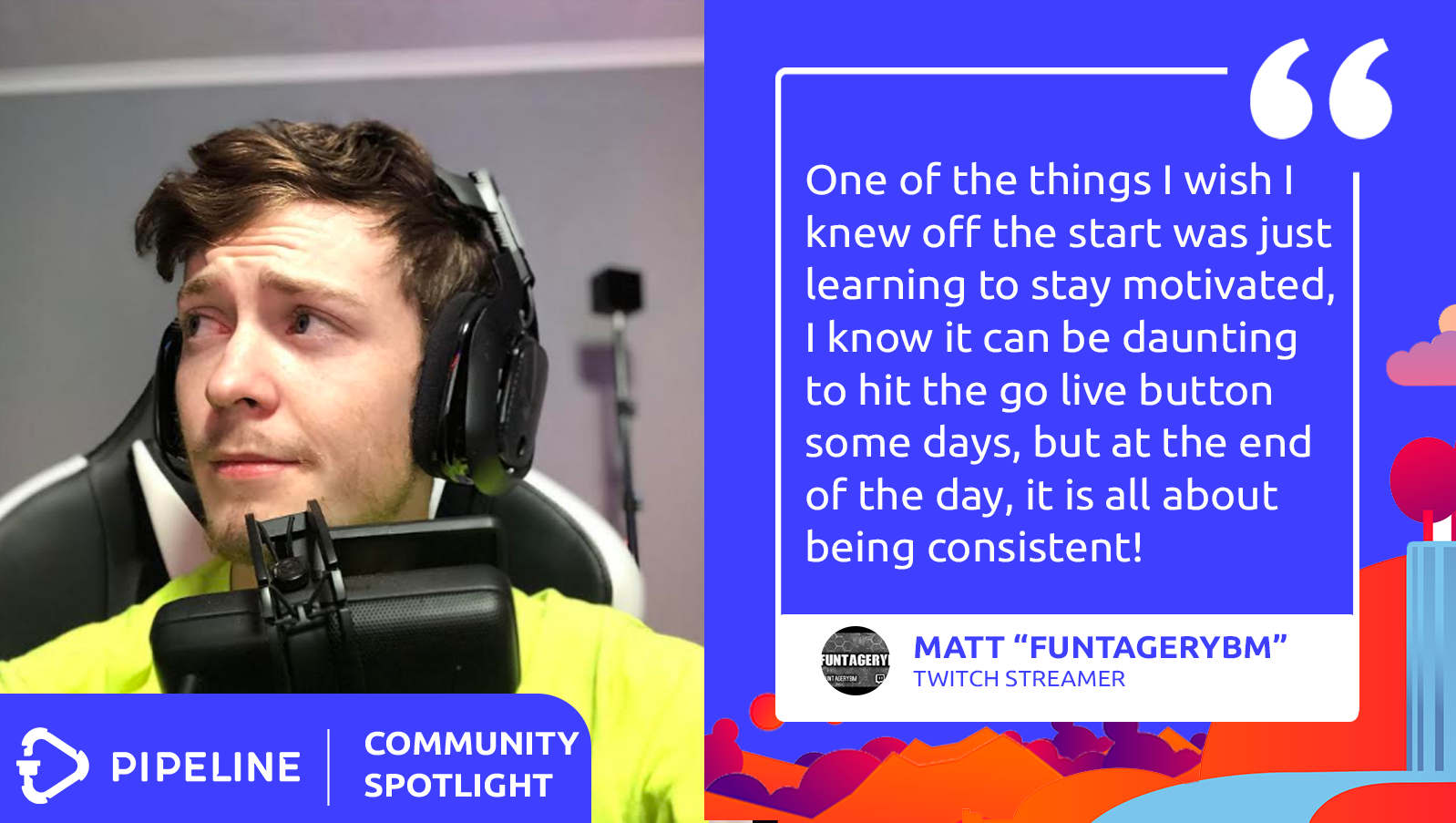 The life of a streamer isn't easy, especially if you're someone who wants to make a career for themselves in content creation. To click on the 'Go Live' button consistently and regularly, even on challenging days, is a sign of grit that shouldn't be understated. For Matt -- also known as FuntageryBM -- consistency is one of the most important parts of being a streamer and is something he has had to develop over time.

Outside of streaming, Matt is a 20 year old full time electric company staffer from small town Nebraska. Having discovered streaming alongside his best friend Ben in high school, FuntageryBM was started as a duo channel for the two to broadcast their gameplay to the world. Matt eventually grew a brand of his own, and he now juggles his day job with his dreams of becoming a full time creator.

For this week's community spotlight, we talked with Matt about how he got into streaming, lessons he's learned along the way and what it was like to share a channel with someone else at the start.

How did you get into gaming in the first place?

So it all started when I was about 5 or 6, my dad started me out with an old school Atari, I'd say the first game that ever got me hooked was definitely Pitfall, I have so many memories on that game. It all kind of took off after that, I started getting into PlayStation and Xbox games, mostly Halo, then discovering so much more! I guess you could say it was almost my escape at first if I was having a bad day or something, now it has become a very important part of my life!

My journey actually started with me basically just making a YouTube account and trying to make videos on a very old school HP laptop that definitely couldn't handle games. In hindsight, I should have never uploaded those videos with the quality they were at. But I still did it, mostly because I wanted to be the people I looked up to as a kid, I had so many inspirations growing up just simply cause they had the ability to make me smile on the worst days.

Since day one, that has always been my goal was to be like the people I used to watch/ still watch in my own way and with my own twist.

Your channel bio says that your channel's roots were as a joint one with your friend. What was it like sharing it back then?

At the beginning myself and my friend Ben made this channel together cause we both shared the same dreams and such, so it was a lot of fun kind of switching back and forth between who uploaded certain days. Unfortunately our schedules haven't really lined up very much recently, as he has moved away for college and I work full time. We still get together every once and awhile, still love sharing our stories with the community.

I think sharing a channel was probably the best thing for us at the time for being in high school. On days I didn't have as much school work, I would upload and vice versa for him. I definitely don't regret sharing a channel with such a great friend, me and him have been friends since the 2nd grade, where I was the first person from our school to introduce myself to him and our friendship really just grew off that.

Plus it was always a great Good Cop, Bad Cop type thing in a sense where he was the outgoing type and I was the shy one growing up!

What are some of the biggest challenges you've faced as a streamer?

One of the most toughest challenges I'd say is just trying to find the balance whether it was during school, or now with me being a full time worker, sometimes it gets tough to even want to hit the go live button and sometimes I just have to take days off to rest, which I really want to get better at. But I'm still growing and still discovering the best ways to go about things.

Another thing I'd say was definitely trying to learn how to even make a name for myself, these days it's all about algorithms and such, but I didn't realize that at first, so it was definitely tough to hit the average viewers I needed to hit affiliate. Now I'd say one of my biggest challenges would be trying to make time for offline content as well as streaming/ working full time.

On the topic of challenges, what do you wish you knew when you started out?

I think one of the things I wish I knew off the start was just learning to stay motivated. I know it can be daunting to hit the go live button some days, but at the end of the day, it is all about being consistent. I know it can be tough, but it definitely works.

Whether it's every day, every other, or even once a week, just as long as you remain consistent and active on social media you'll definitely start seeing some form of success.

What do you feel separates you from other creators?

I think one of my defining features as a content creator, is just being younger and I feel like I click with a lot of different age groups. I'm also very spontaneous, so I could be serious in the gameplay one moment and then the next I'm just goofing off and having fun times!

Something I feel that sets me apart from other streamers is besides Dr Lupo, you don't hear a whole lot about Nebraska, I find that when I tell people I'm from Nebraska, half the people have never even hear of it hahaha, so nothing major but still sets me apart I suppose!

Where do you see yourself in the future?

One of my main goals right now is to hit 1,000 followers on Twitch. I never thought I'd even come anywhere close to that number or even 100 for that matter, but I've seen a lot of success recently and I think that is the next milestone I have in my sights. Besides that, I'd like to convert some more of my gifted subs to reoccurring subs.

Long term scale of things, I'd really like to work towards being a Partner on Twitch, and hopefully work to the point of maybe turning streaming/ content creation into a full time gig! I also have always had the dream of maybe making my own game someday, just never really attempted yet but maybe someday I can make that a reality.

Lastly, I'd say I would like to become a Pipeline Affiliate!

Thanks for doing this interview! Any shoutouts you'd like to do?

Some shoutouts I'd love to give would first go to some of my friends I know personally, like Ben, Tim, and Cheech, they really helped me stay motivated at the beginning and really gave me the push I needed when I wasn't sure how to keep growing. Secondly, I wish I could shoutout every member of Pipeline I've made great friends with, but I would leave someone out and feel terrible. Instead, I'll say shoutout to StoneMountain of course for being an amazing content creator and helping us out so much. Also to Snoopeh for also contributing so much of your time to us, you both are so extremely kind and I wish I could give you both the most firm of handshakes.

Also, shoutouts to the Pipeline staff in general for creating such an amazing community -- taking the time out of your day to guide us one step at a time and creating such amazing things like the Playbook and the Master Classes etc. I don't know where I'd be without you all and I am truly, forever in your debts!

As for where you can find me you can find me at FuntageryBM on Facebook, Instagram, Twitter, Youtube, and lastly Twitch, mostly live around 7pm CST everyday I can during the week, and on the weekend I sometimes go live earlier in the morning and at night as well.

Thank you for this amazing opportunity to share my story!