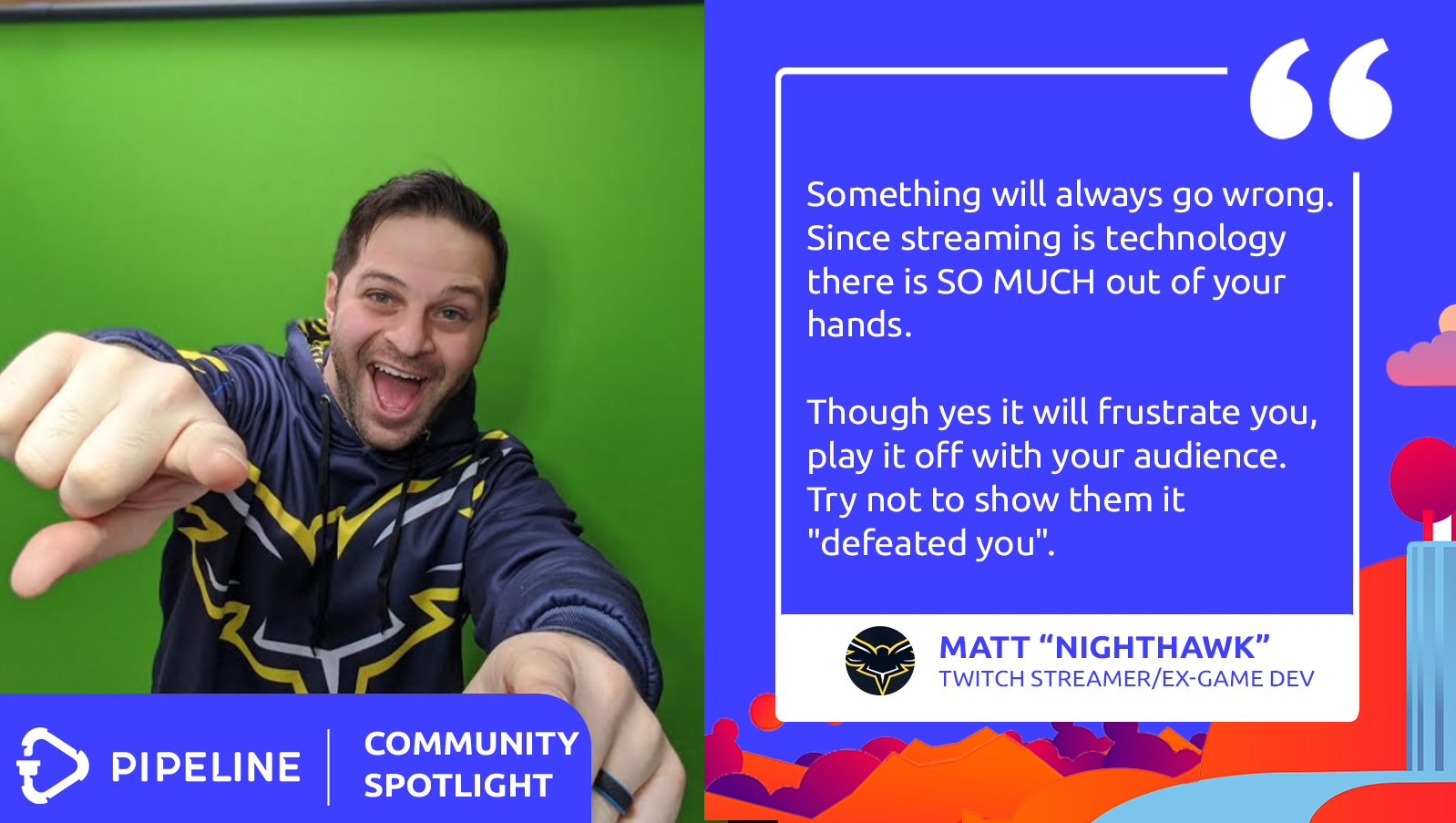 Going from full-time game dev to full-time streamer isn’t something you hear everyday, but that’s exactly what Matt “NightHawkPlayz” Barone did.

A couple of years ago, Matt was living what many would consider a very stable career. Matt was the vice president of business and an art director at a sizable game dev and collectible studio, having worked on many major games and with many years ahead of him.

Matt will tell anyone that he loved his job.  Deep down, however, he also knew it was hurting him. The industry’s long work weeks took a toll on both his mind and body, and he knew he had to go for a change of pace. So after much contemplation and encouragement from his family, he decided to pursue something new: becoming a full time content creator.

Since then, Matt has been through a lot — most notably raising thousands of dollars for St. Jude’s Children’s Hospital. He’s come a long way since he started and has learned a lot throughout that, so we took the time to sit down with him to learn more about his story, what drives him and his upcoming plans.

Here’s what he had to say!

How did your streaming journey start?

I started streaming in my wife’s craft room on a PC my friend put together with extra parts that he had laying around back at the end of 2017. At the time (and still to this day) I was watching streamers like TimTheTatman, DrLupo, Darkness and StoneMountain.

Seeing how they interacted with their communities, their personalities, how they bantered with their friends, I literally said out loud: “that’s me”. Obviously there’s more to streaming, but I saw so much of myself in them so I took the leap of faith.

What made you decide to transition from a game dev background to become a streamer?

I LOVED my job. Working with artists creating 2D character concepts, 3D models, bringing characters and weapons to life as part of statues, Collector’s Editions, and prop replicas all for studios like Warner Brothers, Microsoft, Epic Games, Sony, and Bethesda… I was living the dream.

However working 16/18 hours a day and traveling five hours (2 1/2 to and from) work isn’t healthy both for the mind and body. It took a massive toll not only on myself but my family. So much so my wife literally came up to me, grabbed me by my jacket and said “You need to quit your job. Money isn’t worth this”. And she was right.

What’s the most memorable moment of your streaming career?

By far it’s my Charity fundraising this past year. I helped raise over $60,000 for the kids and families at St Jude, and $20,000 of that was during my four hour block for GCX on Facebook Gaming.

I’m not a Partner, I don’t have hundreds of thousands of followers – I think at the time I had roughly 5,000 followers – and being able to impact a community and see them rally behind you in such a tremendous fashion… There is no better feeling!

On the topic of memorable, what about challenges?

The Billion Dollar question. Everyone has their own unique set of challenges big and small. For me my most recent and biggest was a platform change. I tested, and tested, and tested; And in the span of two months I completely moved from Facebook Gaming – a platform that I’ve been on since DAY ONE, built a tremendous community, raised all that money for St Jude – to Twitch.

Not one day a week, but moved to Twitch period. This was the scariest thing in the world even though it was the right decision not only for me but my community. Oh yeah and of course WINDOW UPDATES!!!

What motivates you to keep streaming?

My wife, hands down. She’s a principal and the smartest person I know. When I told her I wanted to try streaming after leaving my job as VP of Business Development/Art Director at a Gaming and Collectible Studio — with ZERO seconds streamed,– she said “you got this”.

No one in their right mind should have done what I did, nor a wife say “you got this”. She believed in me and sacrificed so much. This is my career and it’s because she saw something in me.

Yes, I want to stream until I retire. I actually want to take it a step further as well and utilize my streams as a branching off tool into hosting and/or broadcasting.

What do you wish you knew when you were starting out as a streamer that you want new ones to know?

Three things pop into my head right away:

What are your goals for the future?

Coming out of this year’s St Jude fundraising season, I’ve made it a career goal of mine to get myself to a point where I can support my family through other means outside of streaming (sponsorships, contracts, etc) and have all my bits, tips, subs, etc donated to a different charity every month. Simply put, I want to raise money for charity every day.

For the short term, it’s sticking to my plan. I just changed platforms, my schedule, and entire routine so I can be in front of more people on different mediums. It’s scary, it’s not easy, but I know that if I stick with it in a few months I’ll see the fruits of my labor.

Any shoutouts you’d like to do? Where can people find you on the internet

So funny story/shoutout. STONEMOUNTAIN… If you’re reading this I’m actually in your house…Yes, that Battlefield 1 Collector’s Edition statue that’s on your shelf behind you when you stream, I concepted, modeled, and manufactured that.

You can find me streaming live on Twitch Monday through Friday 8am – 2pm EST and on Saturdays 10am – 2pm. I also post and connect daily with my communities on Twitter, Instagram, Facebook, and TikTok all @ NightHawkPlayz — with new YouTube videos posted every Monday, Wednesday, and Fridays moving forward.