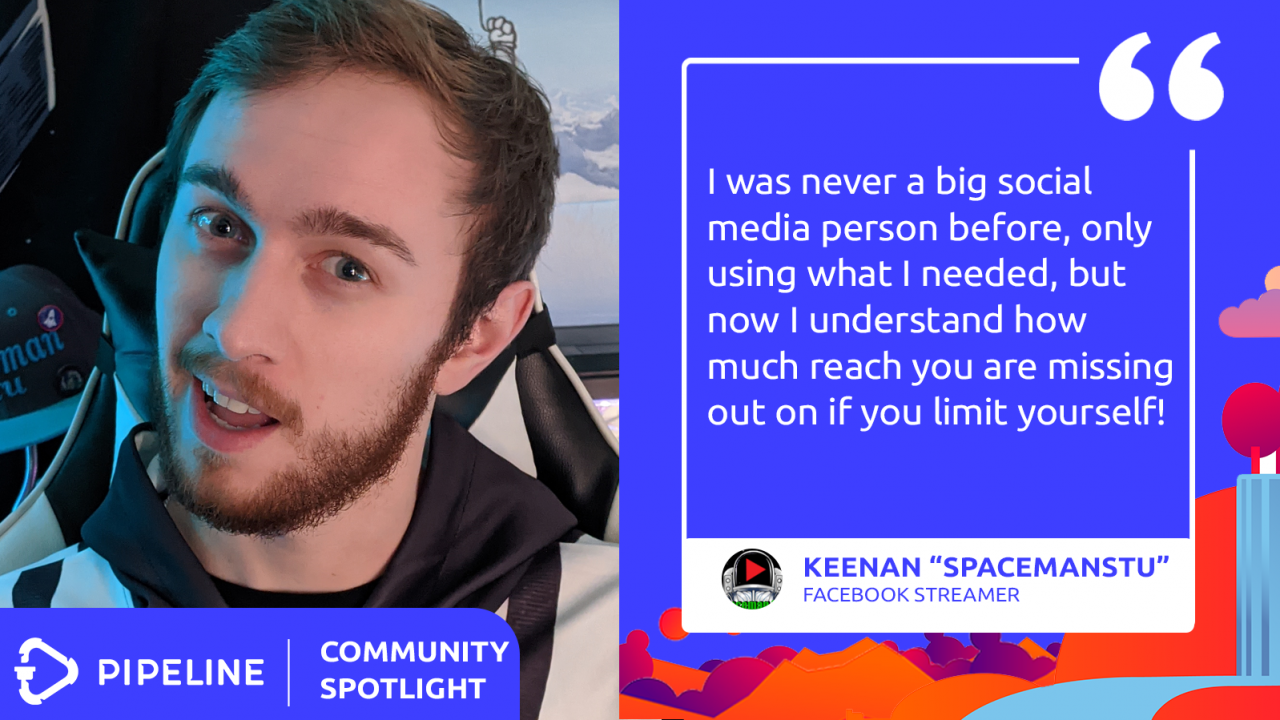 Streaming isn’t something you just magically get better at; it’s a craft you have to develop over time, and that’s exactly what SpacemanStu is doing!

Having begun his streaming journey early on in 2020, SpacemanStu — or Keenan as he’s called outside of the scene — was already creating clips and bite-sized content to share to his friends way before he clicked the ‘Go Live’ button. After much encouragement from his peers, he decided to take a leap of faith and start sharing his gameplay for the whole world to see!

Since Keenan’s streaming, he’s learned a lot about what it takes to turn his hobby into a career. We sat down with him earlier this week to talk more about the lesson’s he gained so far and what he has planned for the future.

Here’s what he has to say!

How did you get into gaming?

I got into gaming at a young age, playing mostly multiplayer GameCube and PS2 games with my brothers! I have a heart for retro games as well, loving arcades as a kid. But my real gaming journey started when I got my first PC in middle school. Immediately I was hooked to the more competitive online multiplayer games, such as Runescape, League of Legends and PUBG!

So gaming really was a life-long hobby. How did your streaming journey start?

Before I pressed that “Go live” button, I used to record and edit clips of my gameplay just for friends to see. With enough recommendation from friends and inspiration from GREATS like Stonemountain64, I decided to get my foot in the door of streaming as a founding member of Pipeline actually! I started streaming at the beginning of 2020 and am loving every step of this crazy journey as well as all of the amazing characters in it!

It’s almost been a year since you started streaming. What are some of the most memorable moments so far?

My career is only beginning, but from every competition to every raid I have enjoyed some amazing moments on stream so far. One achievement was during the first Pipeline Brawls tournament. We played COD Warzone 3’s and although my team didn’t win, I had the most voted on highlight clip with a gnarly rocket play!

I also recently won the Brawlhalla tournament which was an emotional rollercoaster, surely making both friends and rivals.

Of course, there have been challenges along the way too. Care to share any of them?

Streaming comes with many challenges, whether it’s technical difficulties or discoverability and the Space HQ has had a few! I remember struggling with Tarkov optimization for the stream for ages before finally asking another streamer or two for some tips that helped dramatically! It is important to remember you are not in this alone and reaching out to others has always helped me! The streaming atmosphere is full of wonderful groups and communities like Pipeline to help you along your journey like it has mine!

What do you wish you knew when you were starting out as a streamer that you want new ones to know?

When I first started streaming I wish I understood the importance of editing content and distributing it to other platforms. I have since looked to other creators to help learn better networking habits as well as editing programs such as Davinci Resolve. I was never a big social media person before, only using what I needed, but now I understand how much reach you are missing out on if you limit yourself!

What motivates you to keep on the grind?

Success motivates me. Success in my peers and even that of the industry. It keeps me going watching people do what they love to change their stars. Streaming is growing and changing rapidly and those who are willing to roll with it and learn have clearly made something of themselves. I believe there is space on that success ship for all of us who are willing to take the journey and I’m in it for the run

Now, let’s talk about the future. What do you have planned or aspire to reach?

My short term goal is to become a Facebook partner! That supporter button would be a lovely addition to the page. I also need to get a TikTok up and running for the Space HQ!

A longer term goal of mine would be to increase the overall production value of the stream! More lights ( WOOOH RGB), Cameras (Cat cam soon!) and action (guest appearances and collabs)! Possibly even the launch of a Space HQ podcast!

Any shoutouts you’d like to do? Where can people find you on the internet?

Ayyyy shoutout to the SPACE CREW for making the streams possible behind the scenes! Also Stonemountain64 and Snoopeh for the wonderful Pipeline community that has helped so much with getting started! I would also love to shoutout my amazing wife for not only supporting my creative side but also joining me on some of the adventures! You guys are all amazing!